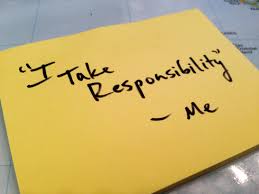 I’ve been thinking a lot lately about taking responsibility for ourselves.  How often do we do that?  How often do we blame others or God for things that happen to us?  This was prompted by a question from my young son who asked why God sometimes allows bad things to happen to people.  We talked for a while about free will and the consequences of our choices.  “But what about people who didn’t do anything to cause what happened to them,” he asked.

I answered him as best I could, but it’s been on my mind ever since.

What I’ve been thinking is this: when bad things happen to us, the first thing I have to do is ask, “Did I do anything to contribute to this?”  (Please don’t hear that I am blaming the victim.  Hear me out.)  If I’m exhausted, but driving my car anyway, and I get into an accident, is it possible that part of the fault is mine?  No, I didn’t cause the rain to make my car skid off the road, but could I have had faster reflexes if I’d been refreshed instead of exhausted?  Maybe.

What about the time last winter when I came down with shingles?  Was I partly to blame for that?  Perhaps.  I was super-stressed, yet I didn’t take the time to do the things I needed to do to reduce my stress level.  Is it possible that if I had I might have avoided that dreadful illness by taking better care of myself?  Maybe.  Maybe not.

Now, there are other things, I am quick to reassure my son, that happen and it’s no one’s fault.  Cancer is oftentimes a good example of that.  Here’s another one: last year someone I know was at a family picnic.  She stepped wrong, fell, and broke her leg.  I have a hard time thinking that she was at fault there.  Sometimes these things just happen.

I know that really awful things happen in the world and the benign examples I’ve given are not an attempt to ignore them, just to keep us out of the deeper waters of war, poverty, disease, and other tragedies.  We’ll tackle those when my son is a bit older.

In the long run, it doesn’t really matter who is at fault when bad things happen.  It’s mostly a philosophical question.  What is important, though, is not to see ourselves as victims.  I need to have the courage to take a good, honest look at myself and admit when I am responsible for my own misfortune.  Sometimes there is a kernel of responsibility that lies with me.  Sometimes there is not.  It doesn’t change anything, really, but it can make me feel more empowered when I can differentiate between those misfortunes I’ve contributed to (and take responsibility) and those I haven’t.

This site uses Akismet to reduce spam. Learn how your comment data is processed.